The new arrangement will encourage research, development and innovation activities as well as the training of engineers 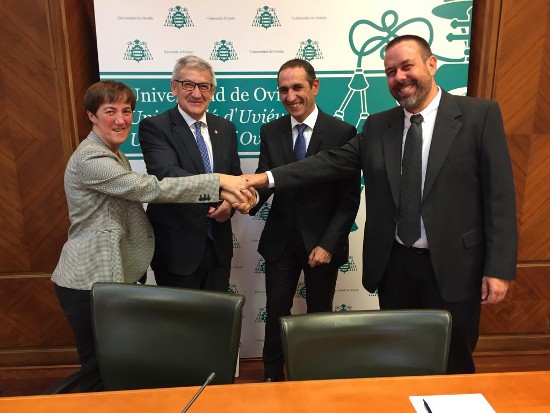 1st October 2019.- The Basque technology centre, IKERLAN, and the University of Oviedo have signed an agreement with the aim of consolidating and strengthening collaboration between the two organisations and promoting research, scientific communication, technology transfer and training activities in the fields of mechanical engineering, electronics and communications, energy and power electronics.

The agreement was signed by the Dean of the University of Oviedo, Santiago García Granda, and the General Manager of IKERLAN, Marcelino Caballero Pozo. Among other initiatives, this agreement will promote areas of research and assistance for doctoral theses, the creation of end-of-study awards, the design and provision of postgraduate programmes and the organisation of conferences, publications and scientific events. It will also enable an exchange of researchers and internships at the University of Oviedo itself and at IKERLAN.

“Today is a very special day for IKERLAN because, with the signing of this agreement, we are taking an important step in cementing our relationship of almost two decades with the University of Oviedo, which we hope will allow us to continue improving our skills and the value we bring to companies and society in general”, explained Marcelino Caballero Pozo, after signing the agreement.

IKERLAN is a leading centre in technology transfer and in the contribution of competitive value to the company due, among other things, to the specialisation of its researchers. It offers comprehensive solutions that combine different technological fields into three large areas: Electronics, Information and Communication Technologies (EICT), Energy and Power Electronics and Advanced Manufacturing. In 2018, IKERLAN obtained certification, via AENOR, for the integrated management system (UNE-EN ISO 9001:2015 and UNE 166002:2014), which recognises the excellence of the centre in the field of R&D&I. It currently has a staff of over 300 people and invests more than €1.5 million each year in student education (6,25 % of its turnover), training more than 100 students each year, including more than 40 PhD students.