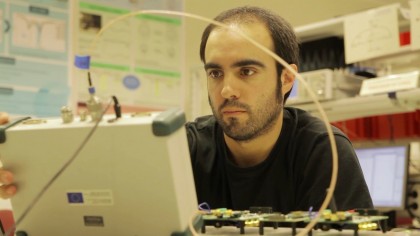 Our mobile phones have advanced technology built into their computing components that shuts down or reduces functionalities to cut power consumption whenever their full potential does not need to be used. IK4-IKERLAN is leading a European R&D project called SAFEPOWER that is aiming to incorporate strategies and technologies of this type into embedded systems, which are small electronic processors used in a range of industrial and transport applications, to improve their energy efficiency by 50% without compromising their safety.

Smartphone manufacturers and other multimedia industries have developed highly evolved power consumption strategies so that their products can offer a large number of functions without relying on an external power source and which can function just on a small battery.

Aware that embedded systems (small computing processors with a very specific functionality inserted into larger devices) used in industry and transport are not that efficient, the European Commission has decided to promote this project so that it can help to transfer strategies and energy management technology used in consumer electronics to these sectors.

The SAFEPOWER project, which has kicked off now in January and which will have a duration of three years, has a budget of four million euros. Apart from IK4-IKERLAN, which is leading the initiative, highly important companies such as the Basque  CAF Signalling, and SAAB, fentISS, Imperas, the R&D institutes OFFIS (Germany) and KTH (Sweden), and the University of  Siegen (Germany) will be participating.

The use of embedded systems has multiplied exponentially over the last two decades. These small computing processors control one or more functions in the element in which they have been fitted (a machine in a factory or a means of transport, for example) and have hundreds of applications, many of which are of a critical nature from the safety perspective.

One of the big challenges facing European industry is to integrate more and more functions into fewer devices and to make them more energy efficient without losing a single iota of dependability. The idea is to cut the number of devices in the various systems by incorporating functionalities of a different type, which previously required several devices, into a single device.

To achieve this, more and more work is being done to increase the processing capacity of each device. So SAFEPOWER will be developing systems equipped with multiple processors (multi-core), as opposed to those that only have one processor (single-core). This will allow savings to be made in resources and energy as a single embedded system will be capable of handling a range of functions.

Two demonstrators will be produced using the technology developed in SAFEPOWER. They will both be exploring strategies and technologies that will optimise power consumption depending on the functioning demands, and both will be of a critical nature in terms of the safety of people and property.

One will be part of a railway signalling system. These devices cannot be allowed to fail, otherwise they could jeopardise the lives of many people. So the demonstrator will need to meet strict safety requirements so that it can comply with the regulations. Energy efficiency strategies will also be developed.

The other demonstrator will be a flight control system for aircraft. This system will be capable of integrating different functions that are currently undertaken by various processors, so it will allow the same functions to be brought together in less space and using less energy, which are requisites of particular interest in onboard technology in a means of transport.

An independent certification body will be assessing the technologies developed in SAFEPOWER. This review will also be useful to validate the result and facilitate its transfer to the market, because apart from endorsing their usefulness, it will allow possible incompatibilities with the safety standards currently in force to be anticipated.

IK4-IKERLAN has long experience in the area of embedded systems for industry and transport, in particular, in applications capable of handling functions that are critical for safety together with others that are not critical. The centre is a benchmark on a European level in the development of devices of this type known as mixed criticality systems.

“At IK4-IKERLAN we have great experience working with embedded systems. This is borne out by the fact that we are participating in four European R&D projects in this field and are leading two of them,” said the centre’s researcher Mikel Azkarate-Askasua. “Embedded systems are of tremendous use for companies because they provide their products with distinctive capabilities such as more functionalities and greater energy efficiency,” he added.

“In SAFEPOWER we will be incorporating cutting-edge technologies into the energy management of computing devices, which until now have been used in consumer electronic devices, into critical industrial applications. We will also be cutting the number of devices that need to be built into each product,” explained Azkarate-Askasua, who is the project leader.

IK4-IKERLAN is a leading centre in the transfer of technology to companies and in providing them with competitive value, thanks to its capacity to offer comprehensive solutions by combining various technological domains. This is possible owing to its high degree of expertise in six major areas: embedded systems, power electronics, microtechnologies, energy efficiency and storage, mechatronics and advanced manufacturing.