The Basque technological centre IKERLAN is working on an innovative application to protect aircraft wings against ice, with the aim of providing greater energy efficiency and reliability than conventional systems 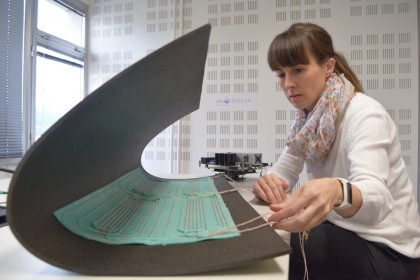 IKERLAN is developing an innovative approach for Airbus DS that will prevent ice from building up on the wings of their aircrafts, using electromagnetic induction technology.
The Basque technological centre, which develops methodologies using electromagnetism for different sectors, will implement a method to heat up a fine metal mesh (0,1mm), integrated into the wings of aircraft wings, made from a composite material. Electromagnetic induction is characterised by speed and efficiency when used as a form of heating, which is why it is expected that this method will be advantageous over other conventional systems.

This R&D project, called InductICE, will be completed in July 2019, and has already received 250,000 in funding from the CleanSky2 program, a partnership established between the European Commission and the industrial sector, which seeks to modernise the aeronautical sector on the continent.

Induction is a method that is being used more and more frequently as a way of heating up metal surfaces, thanks to the speed at which it operates, as it gives you complete control over the power applied and does not require direct contact between the source and the surface you want to heat up. For the methodology currently being developed, the element that will be heated up will be a fine metal mesh, integrated into the outer surface of the laminate of the composite material used on the leading edge of the wings, underneath which will be an induction coil. It is expected that overall efficiency levels will exceed 90%, improving current conventional systems already in use. The system will be entirely modular, allowing it to be used as both an anti-ice system (continuous heating), and de-icing system (cyclical heating), making it even more reliable

What kinds of problems can ice on an aircraft lead to?

When an aircraft flies in icy conditions, a layer of ice can accumulate along the edges of the wings. This layer, which only needs to be a few millimetres, can have implications on flight safety, can diminish the aircraft’s aerodynamic capacity, produce vibrations, block mechanisms or damage aircraft parts by breaking off and crashing into them.

According to Villar, the project leader at IKERLAN, “de-icing systems are one of the highest energy consumers within an aircraft, and this is why companies within the aeronautical sector are searching for technologies that can provide us with more efficient alternatives. Induction can contribute in a positive way”.

Systems currently in use

De-icing systems that are currently in use can be separated into two main groups: pneumatic methods, which consist of a chamber of air that inflates and breaks through the ice, and thermal methods, heating up surfaces using electrical resistance, which redirect some of the hot air from the compressor.

“The system that we are currently developing at InductICE is much more energy-efficient than conventional methods, which is an important factor for technology installed on an aircraft. Airbus DS has raised its use in manned and unmanned aircraft”, explains Irma Villar.

It is a continuation of the INDUCTAIR Project, also developed by Airbus DS, and IKERLAN, with national funding from MINECO (RETOS Colaboración 2014). INDUCTAIR assessed the practicality of the project’s first phase using a feasibility study, of which the results were positive, meaning that the Project could be continued within the CleanSky2 program.

To both projects, Airbus DS brings its knowledge and experience in detection, formation and protection against ice, as well as the integration of systems on aircrafts. IKERLAN, in turn, contributes its knowledge, experience and expertise in induction systems.

Many conventional tools and equipment used within the industrial and consumer sector utilise electromagnetism inside components such as transformers, motors or generators.

Furthermore, during the last few years, the industry has started to use electromagnetic induction in soldering, thermal treatment or heating, and in domestic kitchens, as well as within the health sector for scanners and various forms of treatment.

The technological centre IKERLAN has been working within the field of electromagnetism for several years, generating competitive solutions for various sectors, with the aim of taking advantage of the numerous opportunities that this form of technology provides us.

“At IKERLAN we believe that electromagnetism has huge potential in stimulating the development of our industry, as it opens up very interesting perspectives on tackling technological challenges in hugely important sectors, such as the transport, food or industrial sector”, states Unai Viscarret, the manager of the centre’s Energy and Power Electronics unit.

“In order to help companies around us take advantage of the opportunities available in this sector, at IKERLAN we count on a team of specialised investigators who are in the process of developing cutting-edge technology for leading companies such as Airbus DS, Copreci, CAF, Orona and Batz”, Viscarret adds.

IKERLAN is a leading centre in technology transfer and in bringing competitive value to companies, particularly thanks to its specialised researchers, offering global solutions that bring together different technological domains. This is all possible thanks to IKERLAN’s high level of expertise across three main areas: Electronic, information and communications technology (EICT), Energy and power electronics, and Advanced manufacturing. IKERLAN currently has a trained team of around 290 employees.