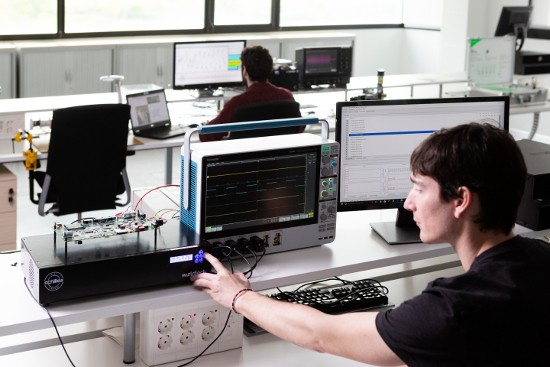 The Basque technology centre, IKERLAN, continues to expand its presence in the field of international research. In 2018, the organisation secured a total of 13 new European projects, with a 27% success rate. The amount attracted by the organisation in 2018 under this programme totalled 5.8 million euros.

European projects are competitive initiatives funded by the European Commission, mainly under the H2020 framework programme. Europe's most prestigious technology centres elect to participate in these technological research and innovation projects led by the European Commission. For this reason, the competition between agents and technology centres is very high, requiring a high standard of excellence to elect to participate in the projects.

The success rate, the percentage of projects that are finally financed compared to the total number of projects presented by each centre, is the main indicator that reflects this high level of competition.

The preparation of European projects is an exercise that requires considerable effort and therefore the success rate is an indicator of the efficiency, professionalism and excellence of a centre.

“"The results obtained in 2018 are not by chance, and this is reflected in our track record in European projects since 2007" says Ana Martínez Esnaola, Director of Knowledge at IKERLAN.

This track record validates IKERLAN's strategy towards European projects, given that “we only opt for projects that are aligned with our research and that help us to develop the technology that addresses the industrial challenges of our area”, argues the Director. “Europe is a means, not an end, to us: that is why we are selective when it comes to competing for projects and, in some cases, we have to say no to invitations that we receive when they are not aligned with the technologies that our companies need”, Ana Martínez points out.

European projects do not only allow centres to acquire knowledge and develop technology: “our performance in Europe also demonstrates our ability to establish alliances with leading international partners”, says Chris Merveille, International Director of IKERLAN.

In this regard, the Basque centre has key partners in Europe, such as the German centre, Fraunhofer Gesellschaft (20 joint projects), and the technical research centre, VTT, in Finland (9 joint projects).

In addition to participating in fields aligned with the interests of Basque companies, such as aeronautics, electronic systems, energy, industrial digitalisation and electromobility, IKERLAN is also a major partner for various Basque companies with which it collaborates in Europe on projects of mutual interest.

"Every year we participate in a number of international projects with our clients, where a good alignment of the projects with the technologies of their interest and a high success rate are of fundamental importance in order to maximise effort", concludes Chris Merveille.

IKERLAN is a leading centre in technology transfer and in the contribution of competitive value to the company due, among other things, to the specialisation of its researchers. It offers comprehensive solutions that combine different technological fields into three large areas: Electronics, Information, and Communication Technologies (TEIC), Energy and power electronics, and Advanced manufacturing. In 2018, IKERLAN obtained the certification, via AENOR, for the integrated management system (UNE-EN ISO 9001:2015 and UNE 166002:2014),  which recognises the excellence of the centre in the field of R&D&I. It currently employs more than 300 people.