IKERLAN grows by 5,5 % in 2018 thanks to the growth in turnover with companies

IKERLAN received 13 million euros last year through transfer projects for companies, 8,3 % more than in 2017. This figure represents 57 % of the centre's total turnover. 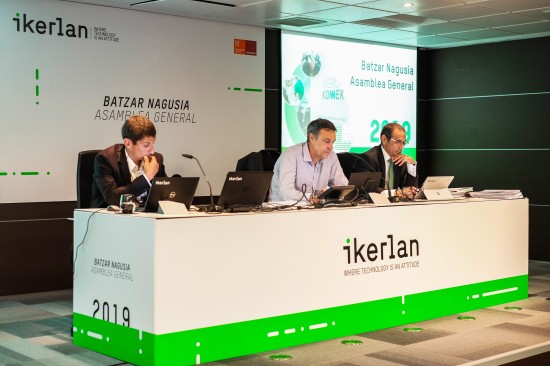 The total income of the Basque technology centre, IKERLAN, totalled 22.8 million euros last year, an increase of 5,5 % over 2017, confirmation of the sustained growth that the centre has maintained since 2014. The result confirms the solidity of the Basque organisation's technology transfer model, since 57 % of its consolidated turnover comes from contracts with companies.

Specifically, IKERLAN received 13 million euros as a result of R&D projects with companies during the period in question, 8,3 % more than the previous year. In addition, 8,9 million related to own research activities, a figure that shows an increase of 2,2 % compared to 2017 and which accounts for 38,5 % of total turnover.

The turnover from contracts with companies originates in the area of capital goods (38 %), followed by transport (27 %) and energy (26 %), with a portfolio made up of clients as prominent as ORONA, CAF, FAGOR ARRASATE and LAULAGUN.

With regard to the income obtained from own research projects, 23,2 % of total income comes from programmes promoted by the Basque Government, 13,9 % from initiatives promoted by various European institutions and 1,4 % from projects of the Spanish State Administration.

"Last year was a tremendously important year for the IKERLAN initiative, not only because of the excellent results obtained, but also because of the strengthening of our position as a leading centre for technology transfer to companies", said the centre's general manager, Marcelino Caballero.

These results obtained by IKERLAN last year were approved during its General Assembly, held on 20 June at GARAIA Technology Park, in a meeting that brought together working partners, users and collaborators and authorities.

The meeting was also used to celebrate the 45th anniversary of the cooperative at Arrasate-Mondragón’s headquarter, with all the staff through an event in recognition of all the people who participate in the venture. The meeting also served as an opening ceremony for its renovated spaces, which has a series of new laboratories such as Industrial Cybersecurity, Combustion and Smart Mobility/Smart Building, as well as a new Experimentation Area for special projects. Furthermore, the meeting had as an objective the renewal of the commitment acquired in 1974 as the first technological centre in the country.

People as the linchpin of the enterprise

The driving force behind IKERLAN is the skills, abilities and attitude of the people who work there, hence the centre's firm commitment to attracting and developing the best talent.

As proof of this, and following the growth momentum of recent years, last year IKERLAN recruited 37 new researchers and 15 new doctoral students, bringing the total to 318 people including workers and staff in training.

Also, in the areas of professional development and work-life balance, various initiatives were carried out in 2018, such as, for example, the implementation of a new schedule with all Fridays of the year being intensive for all staff. Progress has also been made in the area of gender equality, with the creation of an Equality Committee and the collaboration of the Provincial Council of Gipuzkoa within the Etorkizuna Eraikiz framework.

In the context of scientific activity indicators, IKERLAN currently has 49 research projects underway, 16 with the Basque Government, 5 state projects, 4 with the Provincial Council of Gipuzkoa and 24 European projects. This last figure reflects the excellent performance of the centre in the competitive proceedings conducted by the European Commission. Only last year, the organisation was awarded a total of 13 new projects, a figure that gives a success rate of 27 % (percentage of projects financed in relation to the total submitted), doubling the national and European rate and resulting in accumulated revenues of € 5,8 M for the coming years.

“We only apply for projects that are aligned with our research and that help us develop technology that addresses the industrial challenges of our environment. Europe is a means, not an end, for us. For this reason, we are selective when it comes to competing for projects and hence our high success rate" said Caballero.

IKERLAN concluded 2018 with the publication of 31 scientific articles and participation in 40 presentations and conferences.

The reorganisation of the Basque Science, Technology and Innovation Network, pivoted by the Basque Government, has led to the creation of the BRTA (Basque Research and Technology Alliance), in the construction of which IKERLAN has been an active participant. BRTA is a cooperation project that is key to the future of the Basque Country, which IKERLAN has joined with enthusiasm and energy to offer its understanding of cooperation and technology transfer to companies.

A new identity for a new era

Another of the major steps recently taken by the technology centre has been the reformulation of its corporate image through the THINK BAI campaign, an initiative that seeks to strengthen its technological identity and cooperation with the surroundings, while remaining a leader in the transfer of technology to companies (Technology, our attitude).

The new logo is the most visible element of this campaign, but the revamping of IKERLAN is not limited to the rethinking of its graphic identity, but also encompasses other fundamental aspects such as the organisational model itself and its premises and laboratories, which have undergone a profound transformation in recent years.

"At IKERLAN we believe in the constant need for change in order to adapt and even anticipate the needs and challenges of our surroundings. We have put this idea into practice in our THINK BAI campaign, because we think positively, with conviction whilst always maintaining our identity", concludes the general manager.

IKERLAN is a leading centre in technology transfer and in the contribution of competitive value to the company due, among other things, to the specialisation of its researchers. It offers comprehensive solutions that combine different technological fields into three large areas: Electronics, Information, and Communication Technologies (TEIC), Energy and power electronics, and Advanced manufacturing. In 2018, IKERLAN obtained the certification, via AENOR, for the integrated management system (UNE-EN ISO 9001:2015 and UNE 166002:2014),  which recognises the excellence of the centre in the field of R&D&I. It currently employs more than 300 people.