IKERLAN grows 5,7 % in 2019, strengthening its client portfolio and increasing its in-house research projects

The technology centre ended the year with a total revenue of 24,1 million euros 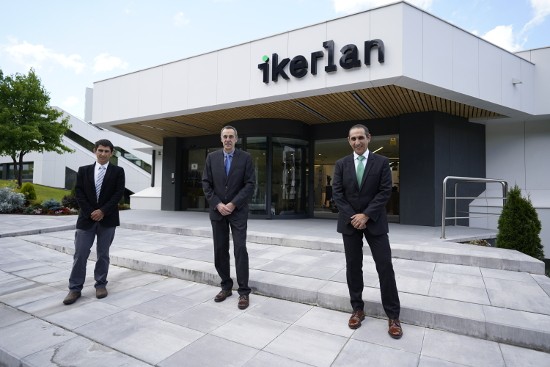 The total revenue of IKERLAN, the Basque technology centre, stood at 24,1 million euros last year, an exceptional result that represents an increase of 5,7 % compared to 2018, and which continues the trend of sustained growth achieved by the centre since 2014 within the framework of the IK2020 Strategic Plan. Coinciding with the anniversary of 45 years since its creation, with these results IKERLAN confirmed the soundness of its technology transfer model, given that 54 % of its consolidated turnover in 2019 came from contracts with companies.

To be specific, IKERLAN achieved a turnover of 13 million euros through R&D projects with companies in 2019, thereby equalling the challenging number achieved in the previous year. Also, 10 million euros related to in-house research activities, an increase of 11,2 % compared to 2018 and accounting for 41 % of the overall turnover. It is also worth highlighting the high success rate in tenders.

The turnover generated by contracts with companies came from the capital equipment sector (42 %), followed by transport (28 %) and energy (20 %), with a client base as strong as ORONA, CAF, FAGOR ARRASATE and LAULAGUN.

With regard to the 10 million euros obtained from in-house research projects, 25,9 % of the centre's total revenue came from programmes promoted by the Basque Government, 13,6 % from initiatives promoted by various European institutions and the rest of the funding, 6,7 %, came from projects financed by the Spanish Government, the Provincial Council of Gipuzkoa and the Mondragon Corporation.

With regard to people, in keeping with the growth trend of recent years, last year IKERLAN recruited 42 new researchers and 17 new PhD students. Accordingly, the centre closed the 2019 financial year with a workforce of around 350 people, including both workers and trainees, maintaining an internal pool of talent consisting of almost a hundred people.

All these outcomes for last year were approved during IKERLAN's General Assembly, held 18 June. For the first time, it was conducted in telematic mode using videoconferencing via streaming (thanks to the support of LKS NEXT and Arteman) and working partners, users, contributors and inactive members were brought together remotely.

The Assembly was chaired by José Mari Balzategi, who highlighted the excellent results achieved by IKERLAN in 2019 and thanked "all the people who make up IKERLAN" for their contribution. It should be noted that, during this meeting, the General Assembly acknowledged Balzategi's commitment and excellent work during his chairmanship, a position he has held since 2018 and which he will be leaving as of today due to his retirement.

Marcelino Caballero, the general manager, pointed out that "2019 has been very positive, both from the point of view of research and from that of projects for the transfer of technology to companies. However, the impact of the COVID-19 pandemic, first in the area of health and subsequently in the economy, forces us to review our strategy for the future, with the aim of optimising the added value provided to companies and thus to become an active and significant contributor to the country's economic recovery.

The 2019 results support the commitment made to technological specialisation, in areas that are useful to the company and to society. Over and above the record figure of 10 million euros in revenue, the centre obtained excellent results in all the tenders, at local, national and international levels.

At a local level, IKERLAN achieved 93,24 % compliance with the Basque Government's EMAITEK+ Programme, especially in indicators related to the transfer of technology and talent to companies. In addition, it has maintained its position as the leading centre of the Basque region taking part in 15 ELKARTEK projects and 4 projects financed by the Provincial Council of Gipuzkoa.

At a national level, the centre was able to finance the three projects presented in the first round of the National Government's CERVERA programme, an achievement that ranks IKERLAN as a technological centre of excellence on the international stage.

As far as European projects are concerned, 13 new projects were secured and funded under the H2020 Programme, with a cumulative income of € 6,3 M This figure reflects a success rate of 74 % on the projects presented and it is noteworthy that 13 Basque companies have been involved in these projects. In this regard, the General Manager, Marcellin Caballero explained that "we are clear on our approach: to develop useful technology for the industrial companies in our vicinity. We are therefore very selective when it comes to choosing projects, which, combined with our experience, explains our high success rate”.

Proof of the centre's good standing in the international arena was the fact that IKERLAN spearheaded three of the European projects in which it was involved, SAFE4RAIL2, ETEKINA and TESTINN. These are projects related to sectors of high interest to IKERLAN and its clients, such as the railway, industrial and aeronautical sectors, confirming the centre's good stature in the international arena.

IKERLAN has been an active participant in the creation and promotion of the new Consortium promoted by the Basque Government under the name of BRTA, Basque Research and Technology Alliance. As a result, in 2019 IKERLAN contributed to the launch of a new phase of partnerships between agents from the Basque Science, Technology and Research Network, after 14 years of participation and involvement within the IK4 Alliance.

As far as other partnerships are concerned, it is worth highlighting the reinforcement of its relationship with the MU/MGEP through the IBAT joint research teams as well as the creation of the new university master's degree in advanced electronic systems, MASTERTECH, a unique and distinctive example of university/technology centre cooperation for specialised technological training of excellence.

Furthermore, in 2019 IKERLAN has maintained a close involvement in the activities and governance of the Basque Cyber Security Centre (BCSC) and has signed two important partnership agreements with the UPV/EHU and the University of Oviedo.

IKERLAN, a member of BRTA, is a leading centre in technology transfer and in the contribution of competitive value to the company due, among other things, to the specialisation of its researchers. It offers comprehensive solutions that combine different technological fields into three large areas: Electronics, Information and Communication Technologies (EICT), Energy and Power Electronics and Advanced Manufacturing. In 2018, IKERLAN obtained certification, via AENOR, for the integrated management system (UNE-EN ISO 9001:2015 and UNE 166002:2014), which recognises the excellence of the centre in the field of R&D&I. It currently has a workforce of around 350 people.