IK4-IKERLAN underpins its growth in the increase of projects with private companies, reaching a turnover of 12 million Euros

More than half of total revenues, 55,4 %, corresponds to collaboration projects with companies, which represents an increase of 4,1 % as compared to the previous year 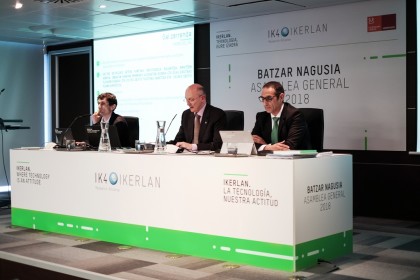 •    The centre registered 21,6 million total revenue, 4,5 % more than in 2016.
•    The technological centre has presented these data during its Annual General Meeting held today in Arrasate-Mondragón

IK4-IKERLAN reached 21,6 million Euros total revenue last year, a fact that was made public today during its Annual General Meeting. This figure represents an increase of 4,5 % total revenue from the previous year, with an accumulated increase of 21 % in the last three fiscal years, which has allowed the consolidation of a staff of 300 people.

From the total income obtained, 55,4 % came from the direct contracting of R+D+i services by companies; and 40,1 % from calls from several public administrations (Provincial Council of Gipuzkoa, Basque Government, General Administration of the State and Europe). In this section, the EMAITEK + program of the Basque Government represented revenues amounting to 4,1 million Euros and another 4,6 million came from public calls to finance competitive research projects.

The CEO of IK4-IKERLAN, Marcelino Caballero, has valued the balance of the fiscal year very positively and has been “particularly satisfied” with the results recorded as a result of collaboration with the private sector, which have reached the expected level of 12 million Euros of turnover.

“One more year, we are witnesses of how our mission and essence, the transfer of technological knowledge to companies, contributes to the private sector a high competitive value that reverts in the increase of their turnover and in the generation of new jobs,” has stated during the event, held in the Garaia Technology Park located in Arrasate-Mondragón.

The results of billing from knowledge transfer projects “are a sample of the commitment of Basque companies for R+D+i as an accelerator of their competitiveness and are also a clear indicator of the confidence they place in IK4-IKERLAN as a key technological ally to boost their capabilities,” says Caballero.

In this sense, the technology centre maintains a consolidated relationship with companies that drive the economy in Euskadi, among which ORONA and Grupo CAF stand out, of which representatives value their relationship with the Centre very positively. “We resorted to IK4-IKERLAN to develop projects of high technological value due to their solvency when applying the latest innovations in a sector with such demanding requirements as the railway,” explains Iosu Ibarbia, CEO of CAF Power & Automation. For Xabier Mutuberria, CEO of Orona, a company of the lifting sector, the long history of collaboration with the technology centre is in itself a model of successful R+D+i innovation that has created spaces for the generation of very competitive added value between research centres, universities and companies. This is based on “the high competitive value of their developments, guaranteeing the ability to continue in the sector’s technological career, delivering new products and services to all users and generating employment in our environment.”

Last fiscal year showed equally positive results in the centre’s research activity. In the evaluation of the EMAITEK+ call of the Basque Government, IK4-IKERLAN obtained excellent results in the indicators of the program, which measure scales such as the activity in R+D+i, the transfer of researchers, the international financing obtained, the requested patents or participation in international projects, and places it in an unbeatable position to meet the requirements set out in Decree 109/2015 of the Basque Government.

In the ELKARTEK call, the centre was consolidated as a leader in ENERGY-Power Electronics and TEIC-Cybersecurity, maintaining its presence in the rest of the research lines. Finally, in the European area, which is characterised by its high competitiveness, favourable results were obtained when getting financing for 7 new projects under the H2020 programme, which will allow us to continue promoting the Centre’s technological specialization.

Amongst the milestones achieved during the last fiscal year, the incorporation of IK4-IKERLAN in the recently created Basque CyberSecurity Center (BCSC), the reference centre in Euskadi Cybersecurity, stands out.

IKERLAN KONNEKT as an initiative for the future

For IK4-IKERLAN, 2017 was also the second year of validity of the IK2020 Strategic Plan, whose main mission is to project IK4-IKERLAN into the future, boosting the Centre’s specialization and positioning in key technologies to solve companies’ technological challenges.

In this sense, and with the aim of giving greater visibility to the competences that place IK4-IKERLAN at the forefront of industrial digitalization, the centre has presented IKERLAN KONNEKT, the family of solutions for the digitalization of products and services for Industry 4.0.

Through this offer of digital platform, the technology centre wants to present, before customers and future customers, the sum of knowledge that gives it the ability to develop integral projects in the digitalization of products and services of industrial companies, from conceptualization to the prototype. It also aims to promote its positioning as a reference agent in key technologies such as sensorisation, embedded electronics and safetysystems, connectivity, IoT, Cloud computing, BigData, Data analytics and cybersecurity features.