The centre had its AGM in Arrasate-Mondragon 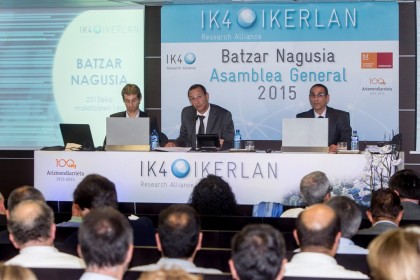 After celebrating its 40th anniversary in 2014, the IK4-IKERLAN R&D centre has opened up a period “full of challenges and inspiration” with the appointing of a new Management Council. Under the leadership of Marcelino Caballero, it has set itself the aim of developing a new project for the co-operative R&D centre. “Our model will be geared towards the R&D needs of our customers, helping the people working in the centre to realise their full potential, and remaining faithful to our model for developing talent; it comes as no surprise that 20% of our staff comprises highly trained researchers,” said Caballero during the centre’s AGM held on May 14th.

The event took place at the Garaia Centre for Innovation in Arrasate-Mondragon. In addition to IK4-IKERLAN's members, the AGM was also attended by representatives of the centre's customers and from the institutions.

“We are working to produce a new, inspiring project,” said Caballero, adding that “the start of the new project is going well and the beginning of 2015 has been hopeful, because the results are turning out to be positive. In fact, the centre needs to recruit more than a dozen researchers over the coming weeks".

A benchmark in mechatronic technological solutions and advanced manufacturing

IK4-IKERLAN has a high degree of expertise, and its capabilities in transversal technologies are enabling it to provide its customers with solutions so that they can compete on increasingly demanding markets.

“Thanks to our alignment with the needs of companies, we have for over the last 40 years been collaborating with our customers on the research and development of mechatronic technological solutions and advanced manufacturing," explained the centre's CEO.

During the meeting the Chairman of IK4-IKERLAN Iñaki Aranburu and its CEO Marcelino Caballero both expressed thanks for the effort made over the previous year by all the people belonging to the centre and which has enabled the centre to achieve a large number of its aims.

“Despite how complicated last year was, we managed to end it with a satisfactory result thanks to the loyalty of our customers,” said Caballero, adding that IK4-IKERLAN stands out “because it has a significant, stable customer base that is well distributed among companies, both co-operative and non-co-operative ones, SMEs and larger companies.”

IK4-IKERLAN’s revenue last year was 17.8 million euros, a figure just slightly lower than that of the previous year. Its turnover and percentage of direct contracting with companies, which is approximately 60% of its total revenue, are a clear indicator of its alignment with the needs of industry.

What is more, the centre has consolidated a team of 250 people and has managed to keep up its effort in the training activities of its researchers. On this point Caballero highlighted the “strategic importance of training and recruiting new technologists and researchers in IK4-IKERLAN and in our customers”.

IK4-IKERLAN increases its weight in the European sphere

One of IK4-IKERLAN's challenges as far as the future is concerned is to expand the capture of resources in the European sphere. In fact, one of the highlights of the year for the centre has been the results it achieved in the Horizon 2020 European R&D project.

Of the revenue obtained in competitive public programmes (36.8% of the total), 12.2% corresponds to the European Union. There has been a 50% increase in Community funding over the previous year.

The centre is working hard to consolidate itself as a leading player in this sphere. In 2014 it participated in 15 European projects and led three of them in key thematic areas for the future development of solutions for its clients like embedded electronics, advanced manufacturing and energy efficiency, among others.

IK4-IKERLAN is a leading centre in technology transfer and in the contribution of competitive value to companies, thanks to its capacity to offer comprehensive solutions by combining various technological domains. This is possible due to its high degree of expertise in six major areas: embedded systems, power electronics, microtechnologies, energy efficiency and storage, structural dependability and advanced manufacturing, plus the fact that it has a significant national and international collaboration network that complements its offer so that it can provide its customers with the best solution.