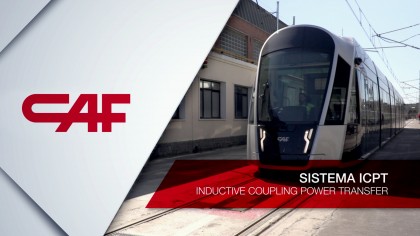 The wireless charging methods are increasingly more common in the automotive and mobile telephony sectors, where many manufacturers bet on devices which do not require wires or plugs to charge the batteries of electrical vehicles and smartphones. This type of chargers, called inductive, transfer the energy from the issuer to the receiver through an electromagnetic field induced in between.

Public transport has been the last one to benefit from this method. The railroad company from Guipuzcoa CAF and the Technological Centre IK4-IKERLAN have developed a wireless charging system of trams which does not require, unlike the conventional methods, any type of direct electrical contact, such as catenaries, wires or plugs, to charge train batteries.

The novel device comprises two coils which are in charge of inducing the electromagnetic field which enables the transfer of energy. The first coil, called primary or issuer, is buried underground, where it remains connected to the electrical network, in areas where the tram makes its stops. The second coil, called secondary or receiver, is installed at the bottom of the train and carries a small converter.

Thus, when the tram reaches the area where the primary coil has been placed, this one generates current and produces an electromagnetic field which induces another current in the secondary coil, transferring the power which charges the train batteries. This energy transfer is safe by nature and does not affect passengers, since it can only be activated when there is a tram on top.

“Thanks to this development, we can take advantage of the stops the tram makes along its way to charge the batteries automatically, with no need to perform any action by the driver, such as the moment we wait for a traffic light, while passengers get off at a stop or when parking in the own parking space,” as explained by Irma Villar, in charge of the project in IK4-IKERLAN.

A safe and comfortable alternative

Therefore, the company from Guipuzcoa has a more comfortable charging alternative which requires less infrastructure than the methods used up to now for their range of trams fitted with accumulation systems GREENTECH. Among them, is the conventional air charging system by means of pantograph or the capture system of energy by means of the third lane, both compatible with the wireless solution which has been developed.

“Although the efficiency of the transfer without contact is not at the level of the traditional solutions, it provides plenty charging comfort, reduces remarkably the necessary infrastructure and does not require any additional safety measures which avoid electrical contacts,” asserts Villar.

In addition, it does not need communication between the ground equipment and the vehicle, or of mobile parts which perform the electrical connection, which allows to significantly improve the system reliability, save purchasing and maintenance costs and reduce the tram weight.

The development has been carried out within the framework of the project ICPT (Inductive Coupling Power Transfer), which started in 2014 and has lasted three years. This proposal is framed within the NUSUR initiative which is in turn subsidized by the Etorgai program of the Basque government.

During this time, IK4-IKERLAN has worked on a prototype designed to transfer 50kW of power which, after validating it in its laboratories, it has been installed in a tram CAF model URBOS, on the test track which it has in Zaragoza.

“It is a very important challenge for the centre, since we have had to develop the whole charger, from the converters of power electronics and its associated control, to the coils for contactless transfer,” asserts the investigator.

The result is a compact piece of equipment completely automatic of fast installation and easy maintenance. It offers a power of 50kW, and taking into account the technology used, it could reach the 100kW, values much higher than those dealt with in the automotive sector.

“This initiative has allowed us to prove the reliability of the wireless charge in our trams with accumulation in the theoretical scope and in a real development,” asserts Pedro Estévez, in charge of I+D projects in CAF.

The applications based on electromagnetism are one of the important bets for IK4-IKERLAN, not only to transfer wireless energy but also for the heating by induction or the design of electrical machines. Over the past four years, the equipment specialized in electromagnetism of the technological centre has worked to prove the reliability of these applications.

Now, and thanks to the bet of CAF, with a development compatible for trams and buses, the centre has been able to validate in a real system the potentiality of the contactless charge in the railroad scope, but it is not the only one. IK4-IKERLAN has also acquired the knowledge to apply this type of solutions in markets with great potential such as hybrid and electrical vehicles.

“Although this development has been conceived for the railroad sector, it is a system totally compatible with other means of transport such as buses. Moreover, there is a strong interest among the big companies of the automotive sector such as BMW or Mercedes-Benz and others, which have already started to apply this technology,” explains Villar.

At the centre, they believe it is a technology with huge potential to drive the development of our industry, since it opens up news perspectives which allow to address technological challenges in so many sectors.

“In IK4-IKERLAN we investigate in this area with the purpose of offering solutions to the real problems of the companies and fostering the technological development of our industrial fabric,” concludes Villar.

IKERLAN is a leading centre for technology transfer and for providing competitive value to companies due, among other things, to the expertise of its researchers. It offers comprehensive solutions by combining different fields of technology in three main areas: Electronics, information and communication technology (EICT), Energy and power electronics and Advanced manufacturing. In 2017, AENOR, has certified IK4-IKERLAN’s comprehensive management system (UNE-EN ISO 9001:2015 and UNE 166002:2014), which is a acknowledging of the excellence of the centre in the R&D&I area. It currently has a staff of approximately 300 people.