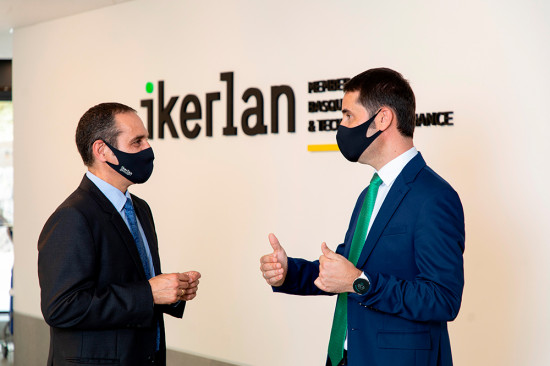 The Governing Council of IKERLAN, in an extraordinary session, has appointed Ion Etxeberria, until now director of People and Marketing, new general director of the centre, replacing Marcelino Caballero, who has been performing this function since 2014 –during a period of sustained growth and technological specialization that have placed the centre as a reference in the field of European research–. The change of general management at IKERLAN is aimed at complying with the requirement of a doctorate degree established by Decree 109/2015 for the General Management of the Technology Centres that form part of the Basque Science, Technology and Innovation Network.

Etxeberria (Arrasate-Mondragón, 1975), who will take up the post on June 30, is a technical engineer from Mondragon Unibertsitatea, a Senior Engineer from the National School of Engineers in Grenoble (France) and a PhD Engineering from the National Polytechnic Institute of Grenoble (France). He also has an Executive MBA from Mondragon Unibertsitatea. With a long career and linked to IKERLAN since 1994, Etxeberria has worked as a researcher, Area Manager and Unit Director, and currently holds the position of Director of People and Marketing.

After this long and intense career at IKERLAN, he takes over the General Management with the challenge of leading the recently approved IK2024 Strategic Plan. His objectives include continuing to strengthen IKERLAN's strategic positioning, promoting policies for attracting, retaining and developing talent, intensifying the contribution of technological value to clients and boosting the market orientation of research results.

The IKERLAN Governing Board wishes to convey to Ion Etxeberria its support and confidence in this new stage. It also wishes to publicly acknowledge the great work carried out by Marcelino Caballero throughout his professional career at IKERLAN and, in particular, during his time as General Manager, in which his leadership and commitment has contributed and will continue to contribute to the notable development that the centre has experienced, both in the field of people and in research and the transfer of technology to companies.

IKERLAN, a member of BRTA, is a leading centre in technology transfer and in the contribution of competitive value to the company due, among other things, to the specialisation of its researchers. It offers comprehensive solutions that combine different technological fields into three large areas: Electronics, Information and Communication Technologies (EICT), Energy and Power Electronics and Advanced Manufacturing. In 2017, IKERLAN obtained certification, via AENOR, for the integrated management system (UNE-EN ISO 9001:2015 and UNE 166002:2014), which recognises the excellence of the centre in the field of R&D&I. It currently has a workforce of around 350 people.